A Great Start, with A Watch thats New & Smart! 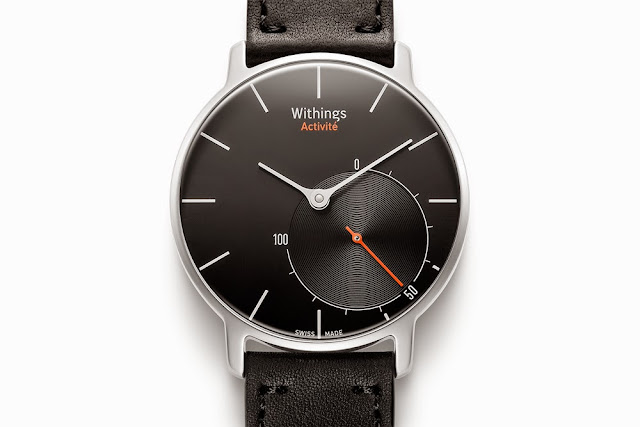 So—do you want a digital smartwatch or an analog cleverwatch? Withings’ Activité fitness tracker may not offer the same notifications and input capabilities as its fancier touchscreen competitors, but it’s a fetching analog timepiece with new-school underpinnings. Beneath its sleek Swiss dial lies accelerometer and motion sensors that track your steps, sleep, calories burned, and distance traveled.

Most of that information is displayed in the Health Mate app for iOS and Android, which conveniently syncs with Withings’ smart scales to track your weight. But this analog watch displays some data besides the time of day. An inset dial shows, as a percentage of your overall goal, how much progress you’ve made toward your daily activity goal. (You set your target in the mobile app.)

This isn’t a wearable wrist computer so much as a watch with some computing power. That approach has some benefits, not the least of which is you aren’t constantly charging the thing. The Activité uses a conventional watch battery that lasts as long as 8 months. And because its doesn’t need a dial large enough to accommodate a touchscreen, it’s the size, shape, and weight of a normal watch. It’s Swiss, with a stainless case water resistance to 165 feet. And while it comes with a stately calf-leather strap, there are silicon straps in the box if you want to wear it in the pool. Withings plans a free software update by the end of the year that will allow the watch to be used as a swimming tracker.

Despite its timeless analog aesthetic, there are futuristic features beyond fitness tracking. For example, you need never adjust the watch once its synced to your phone via Bluetooth LE; it will auto-adjust the time regardless of where you are. And the sapphire crystal is touch-sensitive: Tapping the glass prompts the watch to show your alarm-clock settings.

We’ve been hearing about the Activité since the summer, and Withings promises it’s just around the corner. Preorder now for $450 (you can choose black or white) and the company says you’ll have it before the watch is widely available in late November.
ref: wired.com